I serve the following areas. Thinking about buying or selling? Contact me today! 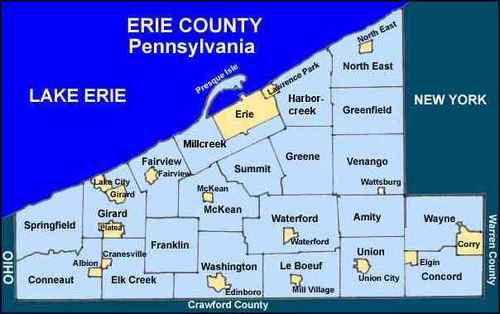 Their are several Boros and Townships thruout Erie. The City of Erie is the main hub for the Bayfront Convention Center. Townships Include Millcreek, which surrounds the center of Erie on both the East and West Side. Fairview Township, Girard Township, Springfield Township, Mckean Township, Waterford, Wattsburg, Harborcreek & North East. (to name a few) Several Boros would include Edinboro, Albion , Lake City, Girard, Corry & Union City.

Erie, Pennsylvania is bordered to the East by Chautauqua County, New York, the Southeast by Warren County, on the south by Crawford County, and on the west by Ashtabula County, Ohio. Directly north of the county is Lake Erie. This position on the water makes Erie County the only county in Pennsylvania to share a border with Canada, which is located on the far shore of the lake. Wikipedia